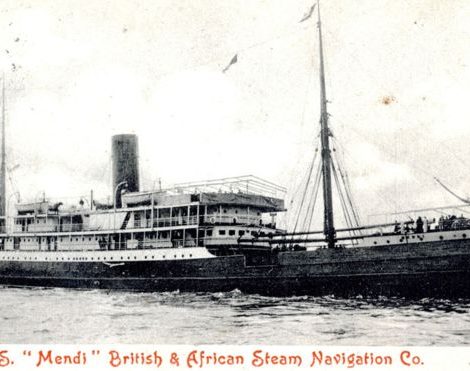 The SS Mendi was en route from South Africa to France. On board were over 800 member of the South African Native Labour Corps. At 5:00am on 21st February 1917 the SS Mendi was sailing past the Isle of Wight when the SS Darro, a Royal Mail packet-boat, ploughed into her at full speed. Catastrophic damage was caused and the SS Mendi began to sink. Although the SS Darro sustained only minor damage her Captain, Captain Harry Stump, inexplicably offered no assistance as the tragedy unfolded. SS Mendi sank in twenty minutes taking with her 616 men of the South African Native Labour Corps and 30 white crewmen.

For those of us familiar with the tragedy that befell 543 Chinese labourers aboard the SS Athos the parallels between the two events – which occurred just four days apart – are striking. It was those similarities that were at the forefront of my mind as I arrived to attend a commemoration event held at the Pyramid Centre on Portsmouth’s seafront, the first of a series of events to mark the centenary of the SS Mendi’s sinking organised by the South African High Commission.

Formal addresses were given by His Excellency, Obed Mlaba, the South African High Commissioner and Dr Andrew Murrison MP, the Prime Minister’s special representative in the centenary. Dr Murrison MP formally launched a new DCLG funded initiative, Unremembered (we have been delighted to be working very closely with the Big Ideas Company who are responsible for delivering the project). Unremembered seeks to encourage remembrance of members of the Labour Corps, in all their incarnations. More on this exciting project next week.

We were introduced to descendants of some of the victims as well as a twenty minute documentary produced by the Commonwealth War Graves Commission. In attendance were the crew of the SAS Amatola numbering several hundred as well as invited guests and members of the South African diaspora in Britain.

Two things particularly struck me as remarkable. First, the afternoon’s events were interspersed with song and dance from an exuberant choir supported by an appreciative audience. It is hard to explain just how powerful the effect was. The singing could be described as jubilant, and yet at no point was the underlying tragedy of the event ever lost.

But something else impressed upon me even more profoundly. I’m not sure if anybody else noticed as I suspect it struck me as it did simply because it contrasted so markedly with how the story of the Chinese Labour Corps is, in my opinion, managed within the Chinese community in Britain. What struck me was how confidently the history had been claimed and presented.

It was a genuine privilege to share some moving moments with the assembled South African nationals: genuinely poignant with such a strong resonance with the SS Athos and Chinese labour. To see the history embraced by the government and people of South Africa so unambiguously highlighted how far we have yet to go in the Chinese community until we can assert our own understanding of history without feeling the need to justify that understanding, or without apprehensive expectation of being challenged or held to account.

It was also a time of reflection, particularly on what and how we remember, and once again I was challenged by the focus of the narrative of the day, and how and why the Chinese narrative anchors itself so very differently within the context of the Great War.

A wonderful experience, so warmly and generously shared by the South African community that I can not but feel I have found something of a point of hope and aspiration of what might be.