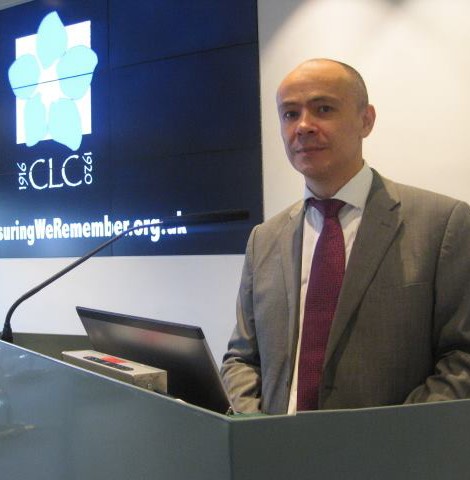 Speech by Steve Lau, Chair of the Strategic Partnership Board

The following is the text of the speech by Steve Lau, Chair of the Strategic Partnership Board which was given at the launch of the Ensuring We Remember Campaign.

It is with a sense of great honour and privilege to stand before you today to announce the launch of Ensuring We Remember, the National Campaign for a UK memorial to the 96,000 volunteers of the Chinese Labour Corps.

At the Paris Peace conference after the war, the decision was made to award the former German territory of Qingdao, and so effective control over the Shandong Peninsula, to Japan rather than handing it back to China. China’s spokesman in Paris, Wellington Koo, warned that this would lead to war between China and Japan within a decade, and China refused to sign the Treaty.

Nine years after that Treaty my late father was born. By the time he was three, Japan had annexed Manchuria in Northeast China, an area equivalent to England and Scotland combined. The newly-formed League of Nations said Japan should leave Manchuria, instead Japan left the League! Seven years later, Wellington Koo’s prophecy came true and China was ravaged by a war with Japan that would last eight years, and by the end of which over 20 million Chinese would have been killed, the overwhelming majority, civilians.

My late father was just a boy of ten when Japan invaded China in 1937, he would be a young man of eighteen by the time the war was over. He grew up knowing the horrors of war and real hunger. Although the war was not something he really spoke of, he once told me that in his search for food (probably after the war) he ended up in Hong Kong, sweeping the floor of a church for scraps of food.

From Hong Kong my father came to Britain where I was born.

That I should be born in Birmingham and not on the farm on the outskirts of Xingning in Guangdong Prvince is, I believe, directly related to the First World War, to the men of the Chinese Labour Corps and to the outcome of the Paris Peace Conference.

Although he didn’t speak of the war through which he lived, my father asked me as a fairly young child, “if China and Britain went to war, who would you fight for?” My father replied to his own question. “You should fight for whoever (or whatever) is right!” It is a lesson I have never forgotten.

I have never felt more strongly that a fight was right than this fight for the forgotten men of the Chinese Labour Corps.

People say you can’t change history. I say they are wrong! A great injustice was done against the men of the Chinese Labour Corps. To all intents and purposes they were forgotten. No more so than here in the UK where not a single memorial exists to those men. With over 43,000 memorials to the First World War in the UK it is hard to think why, even how, this is so. There is undoubtedly some uncomfortable history to face, but this campaign is not about finger pointing and blame, but about recognition and commemoration.

I was humbled to be invited to the National Service of Commemoration at Glasgow Cathedral on the 4th August. Humbled because I was very much aware that I was there not because of anything I had done, but what they had done. My invitation was no different to those of the many people sitting around me – and yet as I sat there a staggering thought came into my head. My invitation by the British Government was almost certainly the first proper recognition of those 96,000 men since the end of the war – and it is arguable whether they were properly recognised even then. Let me tell you something of what happened then. Over 6,000,000 medals were awarded after the war. Notwithstanding that the Chinese received bronze rather than the silver medals everyone else got. All of those 6,000,000 medals had the name of the recipient inscribed on it – all… except for the Chinese. For them, just their roll number. So I sat there in Glasgow Cathedral, humbled, but knowing this:

It will be a century after they arrived, but we will change history, there will be a memorial to the men of the Chinese Labour Corps, and they will be remembered: and not just for the years of the centenary, but for generations to come.

Your cart is empty
Visit The Shop