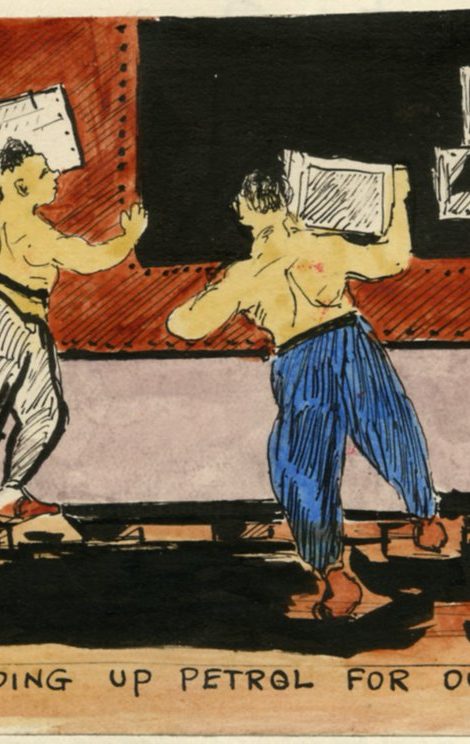 Barbara McClune is to be congratulated for getting Jim Maultsaid’s war diaries published. Although not a diary in the classical sense, with each entry dated, the entries are (or at least appear) to be in chronological order. What makes this book worth the five stars? That’s easy. In this book there is an intriguing, and often spellbinding combination of astute observations on human nature, some quite wonderful illustrations (drawn mostly by Jim Maultsaid, but with the occasional contributions from those he is with) and writing which draws you into Jim’s world, the world of an unassuming down to earth, yet quite remarkable man.

Nowhere is Jim’s remarkable character more clearly illustrated than in the section covering part of his command of a battalion of the Chinese Labour Corps. In stark contrast to most accounts of the relationship between the Chinese workers and their British officers, Jim demonstrates an appreciation and understanding of the Chinese that was totally contrary to how the Chinese were perceived at the time. Fear of the Yellow Peril was at its height, and the Chinese were portrayed in press and fiction (see England’s Yellow Peril: Sinophobia and the Great Warl) as sinister, depraved and licentious. Even British Officers of the Chinese Labor Corps were often shunned by other British Officers simply for being associated with the Chinese, refusing, for example, to sit at the same table with them to eat. Jim Maultsaid, however, paints a completely different picture, all the more amazing because it is the first time he has come into contact with Chinese people. Jim writes,

“To my last day on this Earth I will always have a very high opinion of the Chinese as people. Sober, industrious fellows, interfering with no man, only wanting to live in peace and get on with their own lives, upholding over centuries old traditions. Gain their respect by honest fair dealing and you made a friend for life. Childlike in many ways, their bland simplicity often amused me, and at other times their deep thinking astounded me. I set out to study their habits and language and, according to the Army authorities, became ‘indispensable’ in the Chinese Labour Corps.”

Undoubtedly, given the prevailing attitudes at the time, Jim would have faced some opposition to such views, and yet he stuck to his guns. In my opinion this makes him a man not only of insight but also of integrity.

With the benefit of hindsight we can read Jim’s words with an understanding he could never have had at the time, like his description of a mysterious illness that was killing his ‘boys’. Reading the first few lines of the entry it dawns upon you that he is writing about the Spanish Flu. Knowing what is to come makes reading Jim’s words and his search for an understanding of what is happening all the more poignant, and draws you strangely closer to Jim the man, and with that, further into his world – a dark world of war and weakness, of disease and despair, of sadness and sorrow; and yet a world into which Jim, often inadvertently, shines a light of hope and of happiness.

Buy your copy from Amazon.